A few years back I was at the front of the stage in a marquee that had so few people in it, if you swung a cat you wouldn’t hit anyone.  The chap on stage was playing songs that I grew up listening to, but sadly and quite honestly he was performing them to an empty void.  But, as hit after hit was played, slowly but surely one curious soul after another entered the tent to see who was behind the melodies that were escaping it.  By the end of the gig you couldn’t move or even see the exits, and afterwards the very man who thanked everyone for remembering his music even took the time to chat to me.  It was this meeting and that awe-inspiring set that prompted me to launch a show that would aim to feature music that no other station was giving the time of day to.  Over the past few years The Christopher Laird Show has endeavoured to bring to you music you won’t hear anywhere else.

As I look back on the many artists I have featured on my show some are still with us, some are absolutely huge now, and some sadly exist no more. Lately I have become disillusioned with it all.  Is anyone listening?  Is the show still relevant?  Am I gonna get my interview request dumped again so that the band I really want to talk to can speak to a more high-profile station?  It’s really all about raising your profile these days, isn’t it, or perhaps, actually, it always has been and I for one have just never liked or wanted to play that game (probably the wrong vocation to be a part of for someone who is constantly bucking against the system).  History never remembers the non-conformist does it? But that’s what RadioNowhere has always been about: doing something that no one else is.

A good friend of RadioNowhere who runs an independent record label said to me, ‘We do what we do not for the rewards of money but for our love of music’.  This sentiment reminded me that for every e-mail or phone call ignored by a band or label, there was always that one band and that one label who cherished everything we were trying to do for them.  It also made me reflect on all the wonderful donors and listeners that have supported my vision for radio and for that I am incredibly grateful.  Thinking about these things made me think again about the very reason that tent was empty; it was that people hadn’t heard the music.  That is why it is time to say ‘Goodbye’ to The Christopher Laird Show and ‘Hello’ to an old friend.  Who or what, you ask?  Let’s just say no other radio show on the planet will be quite like it.  If you know me, I’m sure you’ve probably figured it out already… stay tuned…

Oh, by the way, the chap playing the marquee that afternoon was a really nice and rather talented fellow by the name of Nile Rodgers. 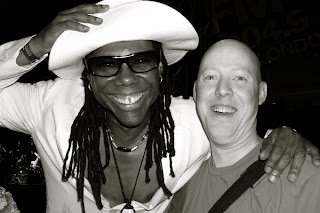 Thanks Christopher. I've enjoyed your shows and your choice of music via the podcast for a few years now. Good luck with what you do and make sure people know where to find you!

I just popped by to catch up with CLS podcasts for September and have just read this sad sad news. (I've never been able to listen to the live broadcast due to life)

Thank you for all the wonderful shows over the years. I have really enjoyed the quirky but current nature of them. Sadly I'm one of the many silent listeners out here that should provided more feedback to say thanks.

I'm now off to dig my way through the CLS archives to fill my listening void with more content (BBC repeat stylee) and to give some of the other RN shows a listen.

Please don't box up your mic just yet.

As you may or may not know Christopher has returned to his true love - VINYL. We are pleased to welcome back The RadioNowhere Vinyl Dungeon!